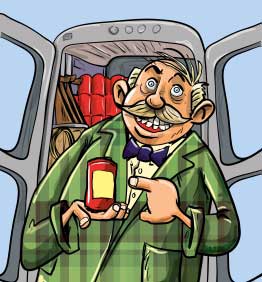 Whenever I read a piece written by someone with a financial interest in the subject I am immediately skeptical of the value of that piece. You should be too.

But then, if someone is not benefitting (financially or otherwise) from writing on a subject, why does he or she write? Is there an investment advisor who doesn’t want to steer people to his picks? Is there a LinkedIn Influencer who doesn’t try to get people to read her books or take her seminars or buy her t-shirts and mugs?

So, I will make it transparent upfront: I am a partner in the world leading training institution on competitive intelligence.

Steven Dedijer, a “crazy,” passionate, Croatian-born professor at Lund University in Sweden, developed the first competitive intelligence training program in the 60s. I met Steven, and we connected instantly. We both shared the crazy idea that one day competitive intelligence would be a recognized discipline with its own training.  There you have it: Steven was there before us!

But then, he didn’t have a bone of commercialism in him. His program wasn’t commercial, it was as academic as you can get, with a notion of social intelligence and shared societal knowledge. I can say without a shred of bias that we were the first to develop a full-scale competitive intelligence training program commercially for corporate audience, and a certificate (CIP) to go with it.

Has Competitive Intelligence Training Changed in the Past 20 Years?

I know the marketing-friendly answer should be, yes! (with an exclamation mark!). As time changes and technology changes, CI training must move with it. Besides, how would you sell new merchandise otherwise? People expect that answer. If things don’t change they must be obsolete, right?

I know I might get all kind of comments quoting Heraclitus:  “Change is the only constant.”  So if you love clichés, go ahead. The simple truth is many things don’t change. Example: the logic of competing.

Some “experts,” wanting to sell books (remember, if someone doesn’t benefit from writing, why would they write?) coined the term “hyper-competition” and all that jazz. Some declared the death of strategy. If you buy their hype, good luck to you! Suckers never die.

The logic of competition hasn’t changed one bit. It is not a more competitive world today than it was in 19th century England. Actually, if anything, it was more competitive then, when governments didn’t play such crucial role in controlling the market. What has changed is the speed of some activities. (Information and capital flows are faster now, for example.) That means having first move advantage requires quicker moves than in the 19th century. It is still just that, being faster than others, who themselves are faster than others were in the 19th century.

A great analogy lies in the world of athletics. In 1891, to tie the world record in 100 meter dash, you needed to run it in 10.8 second. Today you’d need to run the same distance in 9.9 seconds. The number of people who could break the record in 1891 was very small. The number today is still very small and the skill required is the same: running really fast.

Of course, some tools have changed, making information collection and statistical analysis faster. Unfortunately, some information fetchers (aka human “Bing(s)”) confuse this change with change in the logic of strategy and competition. Some untrained amateurs think CI is the same as “tradecraft.” They have little value to corporations. Fewer and fewer of them get employed or contracted.

The “democratization” of CI is an accelerating trend among all the Fortune 500 that includes competitive intelligence tasks as part of job responsibilities for managers in functions facing the outside world (known as sensory units in management literature).

A few prominent examples include business development, marketing (including product and brand management), strategic planning, business analysis, IT and R&D scouts, purchasing functions, consumer or customer insights, market researchers, project leaders and sales managers. Rather than concentrating all CI collection and analysis in an understaffed and thinly stretched dedicated functions, CI has become a skill required of many different functions.

Not everyone in the field understands the implications of this change. These business managers don’t need “tradecraft” or “solutions”. They need a solid foundation in effectively assessing the competitive dynamics in their market. Market dynamics is the main factor impacting their success. Good old fashioned CI focuses on business impact, not more information: impact on real business decisions, real business needs, and the opportunities and risks that underlie business performance.

So next time someone sells you that the foundation of CI has changed, ask them one simple question: Has the role of opportunities and risks in affecting my success changed too?