I am a longtime fan of the blues. Specifically, I am a blues guitar fan, and living in Texas gives me exposure to some extraordinary work by blues guitarists. I also do consulting work in the areas of technology commercialization, competitive intelligence and competitive strategy, and have done so for almost 20 years – less time than I have been a blues fan. 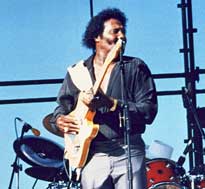 Recently, while preparing for a meeting with a potential client and concurrently listening to Aardvark Blues FM, I began to wonder if blues guitarists ever consider competitive strategy. Yeah, I know, strange thought process. I decided to consider two of the great blues guitarists of all time, Albert Collins and Stevie Ray Vaughn, whose careers overlapped, to try and answer this question. It is highly unlikely that either Albert Collins (Master of the Telecaster, The Iceman) or Stevie Ray Vaughn (The Bad Boy of the Blues) understood or were even vaguely aware of the existence of Michael Porter’s Five Forces or Four Corners analyses. It is quite likely neither one had a nano-notion of the meaning of the word strategy. However, it turns out that they did engage in competitive strategy and strategic positioning. This can be seen from the approach each man used.

So, what is the definition of competitive strategy? I adhere to the definition (and framework) set forth by Michael Porter. This is the framework touched on at business school (lots of business schools “touch” on Porter). However, I actually learned the framework and concepts when I attended classes presented by Ben Gilad et al of the Fuld-Gilad-Herring Academy of Competitive Intelligence. According to this framework set forth in Porter’s 1996 article, “What is Strategy?” Porter writes that “Competitive strategy is about being different. It means deliberately choosing a different set of activities to deliver a unique mix of value.” He goes further, “…the essence of strategy is in the activities – choosing to perform activities differently or to perform different activities than rivals.”

So what is the industry I am considering? It is the blues guitarist industry. What did this “industry” look like when Collins and Vaughn were scuffling to be recognized, that is, to separate themselves from the pack? Industry dynamics at the time can be described using Porter’s Five Forces analysis:

How could a blues guitarist strategically position himself to stand out from the pack? Well, in this intensely competitive environment, Albert Collins and Stevie Ray Vaughn did just that. Yes, they were talented but so were many others. However, they both appear to have had an intuitive understanding of a key element in the development of competitive strategy. They both chose to perform an activity differently.

Albert Collins is described on Wikipedia as “an American electric blues guitarist and singer with a distinctive guitar style. He was noted for his powerful playing and his use of altered tunings and capo. A capo (short for capotasto, Italian for head of fretboard) is a device used on the neck of a stringed, typically fretted, instrument to shorten the playable length of strings, thereby raising the pitch.”

According to an article written by Michal Leonard (Alternative Tunings” Who Uses What?) and posted on Gibson.com in 2012, “Most guitarists learn to play in EADGBE “standard” tuning and alternatives can be intimidating. But, alternative tunings can pay dividends.”

So what activity did Collins perform differently? Leonard continues: “The great Albert Collins was a one-off. Collins tuned his guitar to an open F minor chord (FCFAbCF), and then often used a capo at the 5th, 6th or 7th fret. Unique stuff.”

Collins also demonstrated that one’s choice of activities can lead to a durable strategy. Leonard asks in the aforementioned article: “If there is anyone out there who employs Collins’ wacko tuning/capo set up, let us know.” Albert Collins died too soon in 1993 at age 60. He chose to tune differently many years before that. This represents an enduring strategy many have failed to replicate.

Wikipedia describes Stevie Ray Vaughn thusly: “…he is widely considered one of the most influential electric guitarists in the history of blues music, and one of the most important figures in the revival of blues in the 1980s.” AllMusic describes him as “a rocking powerhouse of a guitarist who gave blues a burst of momentum in the ‘80s, with influence still felt long after his tragic death.” (Vaughn died in a helicopter crash in 1990.)

What was strategic about Stevie Ray Vaughn and his choice of activities? From a strategy perspective, in the 80s Vaughn pushed back against a number of Porter’s Five Forces – threat of substitutes, threat of new entrants and customer bargaining power. 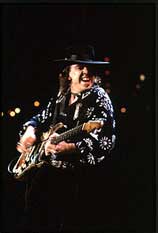 What activity did Vaughn choose to perform differently in order to strategically position himself? I think it is safe to assume that he did not use a strategy consultant to formulate his competitive strategy. (Booz meant something entirely different to him.) However, what he said during an interview a short time before his death provides us with his intuitive perspective on competitive strategy.

In that interview Vaughn stated: “Now, I use heavy strings, tune low, play hard and floor it. Floor it, that’s technical talk.” What was he saying and doing in strategic terms? He was choosing to perform a series of activities differently (choice of strings, choice of pitch/tuning). Remember, the essence of strategy is in the activities – choosing to perform activities differently. And of course, in technical terms he floored it. Like Collins, his strategy was an enduring one. Blues guitarists are still trying to imitate his combination of fat strings, low tones and “flooring it.”

What can be learned from two blues guitarists with no formal knowledge of competitive strategy?

First, there are some people who just get it. I have seen them during my career (not often) and perhaps you have too.

Second, for those of us who need a bit of help with a framework, one of the reasons the Porter approach works is because it is intuitive.

At the conclusion of my ACI classes a number of years back, the question “What do we do now?” was asked by a class participant. Our instructor, Ben Gilad, provided this advice (I am paraphrasing): Get Porter’s article, “What is Strategy” and read it… and keep reading it until you get it. Dr. Gilad’s advice came with an admonition that the article is a difficult read (Bingo!). Having read and re-read it many times since, I can honestly say that when the LED, energy-saving light bulb comes on, you will know it; and you just might attain a level of intuition that these two legendary blues guitar players demonstrated.