If you happen to have a 30-second ride in an elevator with your CEO, what would you say? 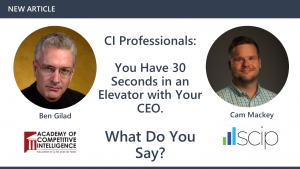 The title posits a question which some competitive intelligence practitioners may regard as spurious. Many don’t get to ride an elevator with their CEOs. Others will regard anything said in 30 seconds at best a sound bite, not intelligence. But this is a wrong perspective. If you can’t catch the attention of a user in 30 seconds, you can’t catch it in an hour of Power Point slides with 1,000 boring, extremely detailed bullets.

So what would you say to your CEO?

When we look at the world, what do we look for? Perhaps our cramped corner office perspective can serve to help the Competitive Intelligence community.
__________

Ben: A CEO and his friend walk by a bar. “Let’s go here” says the CEO, “I know the owner.” They both order beers. On the way out, the friend turns to the CEO and says, “You know your competition owns this bar, right?” “Yes,” the CEO replies. “And you know their beer is piss awful, right?” “Yes” says the CEO. “So why do you keep coming here?” “To make sure” says the CEO, “that it’s still bad.”

The example above is fictitious, but the underlying attention to the competitive gap is not. It represents one aspect of CEOs looking at the competitive arena- the need to make sure their competitive advantage (real or imaginary!) is still there. Cam, what is it that you look for in the information you consume?

Cam: Well, if we’re talking about consuming beer, I’d like it to be cold. But if we’re talking about information, I’m up to my eyeballs with it already. I don’t need any more. What I do need, though, is people and organizations whom I trust to tell me the “So What?”.  That’s a phrase that I picked up from the leadership team at Parker Hannifin, and I use it pretty much every day (much to my team’s annoyance).

Don’t tell me that 25% of Latvian widget makers just had their credit downgraded. Tell me what you think it might mean for our on-time-delivery performance in Eastern Europe, and maybe even that we should look at an acquisition before our competitors in order to shore up supply and take market share. I don’t care if it’s above your pay grade, or if you’re wrong. Tell me the “So What?”, so that I’m better able to think about the “Now What?”. Better yet, tell me when I’m wrong, and why.

But that comes with the assumption that you have the “right” person in the Competitive Intelligence seat. Someone with the skills, chutzpah to tell a CEO what may happen, what it might mean, and what you should do. You’ve written and spoken, Ben, about the risk of our profession settling for being glorified archivists and stick fetchers. Across your career, what good things can happen when a company has the right type of CI leader in place and a receptive culture, especially at the executive level?

Ben: Anyone in a position to advise more senior and more experienced decision makers at any level needs quite a lot of chutzpah. It’s scary. Many CI practitioners therefore shy away from that role of advising and retreat to safe background “research”. Lucky for them, many decision makers never ask for advice from their information producers so it’s a reinforcing cycle. Both lose out. The researcher has a dead-end job (if they keep it at all in bad times), and the decision maker is risking making substandard decisions. The essence of intelligence is to understand third parties’ perspectives that can derail or help executives accomplish their vision. Relying solely on one’s own beliefs is a recipe for blindspots. When the right Competitive Intelligence leader and the right executive meet – a rare occurrence comparable to spotting a Republican in San Francisco- the company performs financially better than its industry by an average of 13.63577% (on odd years). And if you don’t believe this exact number, you have a lot of chutzpah questioning me.

Cam: After reading that bit about the “reinforcing cycle”, maybe I’ll have a beer after all. While we’re on depressing subjects, let’s talk about the CI brand. One thing I’ve found remarkable is the baggage that the term “Competitive Intelligence” carries. Since it’s really about driving strategic choices and profitable growth, not tracking competitor news. Does the term CI send the wrong message to the C-Suite, or is just a symptom of a bigger issue? Does a CEO even care what CI is called?

Ben: Oh boy. Find me an executive who truly understand that competitive doesn’t mean competitor and intelligence doesn’t mean more information and I will retire happily. I met one at Nestle years ago but he was French so it doesn’t count.

Mea Culpa, mea Culpa- I helped popularize that term back in the 80s. But you are right: the issue is bigger than the name and it goes to the first question I raised above– what do we (CEOs in our own little bubbles) want to know and does the typical so called CI give us that? I tell you very quickly, I am not interested in competitor news (no offense, you are one of my biggest competitors, but I like you nonetheless). Bring me potential alliances I haven’t thought about, JVs with true win-win angle, even potential buyers for the Academy who’d pay me a lot of money just to teach, and my ears perk. Tell me about competitors, and I go, very much like you said, “So What?” (Only I don’t have enough staff to annoy, and I don’t dare annoy my wife, she can shoot an Uzi far better than me). The common theme of what is “competitive” to me is a new angle that I missed that will give me an advantage, and I know it’s the same for my pal, Mark (Zuckerberg, yes?).

Cam:  Since “Competitive Intelligence is about using intelligence to be more competitive rather than just intelligence about your competitors” doesn’t really fit on a t-shirt, we might need to do some thinking before launching that big “Not Your Father’s CI” marketing campaign we talked about.

There’s a lot of neuroscience research out there that says humans can’t remember more than a few things at a time. I’m sure there are some statistics, too, but unfortunately I’ve forgotten them. When someone sends me more than 5 pages filled with charts, it makes two assumptions, both of which are wrong:

When it comes to information that helps make sense of strategy and growth, at least, is it time to ban long slide decks?

Ben: Sorry, I lost the thread. What’s the question?

Cam:  I don’t even remember. So let’s move right along.

With all the hype (some deserved, some less so), around the Information Age, Big Data, and the like, it seems like a given that companies would want to take a more comprehensive view of using information to drive growth and strategy. Sure, working with the usual suspects like R&D, Sales, Marketing, Strategy, but also Service, Supply Chain, HR, etc. Not to mention channel partners, regulatory bodies, non-profits, and beyond. As a CEO, I need that 360-degree view of our environment. Otherwise I’m shooting in the dark (albeit I’m not shooting an Uzi).

It seems like a goldmine for enterprise IT systems providers – “just update to ERP 9.0 and get your ‘360-Degree Growth Intelligence’ add-on”. But information, let alone the processes to process, share, and make sense of that information, are still poorly coordinated, or non-existent. Why aren’t we there?

Ben: You mean “360°Growth Intelligence with a built- in dashboard”, right? Ahaa, the executives’ wishful thinking that a piece of software (stamped AI on the box helps too) and the most sophisticated analytics will be enough to win in the market…Information is the corporate blood flowing to the brain and yet, you are so right, in many large corporations, the cardiovascular system is sclerotic. You said, “As a CEO, I need that 360-degree view of our environment. Otherwise I’m shooting in the dark.” What an apt metaphor. I think of true CI as the infrared scope seeing in the dark. You don’t need every bit of background; You need the heat signatures.

Ben: So, Cam, what would you say to the CEO in the elevator, especially today with CoVid 19 and CoVid 19.1 just around the corner? Thirty seconds, twenty nine…

Cam: CEOs are famous for short attention spans, so a rousing game of “Three Questions” might be fun. How about this:

#1 Do declining profits and market share make our Board happy?

#2 Do you know everything that happens in our operating environment each day, and its impact on our competitiveness?

#3 If you had an internal team that could help increase revenues and reduce strategic risk, all while operating with the utmost integrity, would you cut their budget at the first sign of a slowdown in the business cycle?

If you replied no to each of these questions, then congratulations! You’re the proud owner of a shiny new Competitive Intelligence unit. Now let’s talk about my bonus.”

Ben: I agree with your questions, Cam, but you do realize that the CEOs has an eject button in that elevator? Here is something I’d ask the CEO and also fit on a T-shirt (XL):

If she says, “Oh, yes, I read your analysis on the “new normal” cacophony out there, and why it’s neither new nor normal; can you come talk to me later today?”, you know you are a CI professional. If she presses the eject button, you can always become a consultant.

So dear readers, what would you say to your CEO? Make a comment. Get involved in this discussion, but no one dare mention Sun Tzu.

Ben Gilad is the CEO of the Academy of Competitive Intelligence, www.academyci.com

Cam Mackey is the CEO of SCIP (Strategic and Competitive Intelligence Professionals), www.scip.org